Sinterklaas, some retail facts and figures.

It’s that time of the year again when children have impatiently awaited the nightly arrival of Sinterklaas bringing them toys and sweets. He sure has some toy stores to choose from. But where does he find the largest assortment or the most promotions? And should he compare prices before blindly going to the nearest retailer for a specific item?

But how relevant is the element of choice during Sinterklaas? Children compose their wish list and the good man mostly matches their demands. So can you find what you’re looking for at every retailer? You probably can at bol.com given their huge assortment size. But for the brick and mortar retailers a large part of the assortment seems to be unique. There’s only about 500 SKUs that are available at all three of them. Between 66% and 88% of the assortment of each brick and mortar retailer is unique in our comparison, so the best option probably depends on what’s on the wish list.

After Singles Day, Black Friday and what’s more, can we expect another round of high promotion pressure during Sinterklaas? At Dreamland a very low share of the assortment is in promotion, less than 2%.  While Fun has a share of 18% of its assortment in promotion. Maxitoys is in between with just over 8% of products in promotion. Big differences between retailers but the amount of products in promotion is relatively low. We can argue that price sensitivity is less of an issue when it comes to buying presents for kids. Good news for the retailers!

However, it’s not because a retailer has the most products in promotion that they are the cheapest for all products. Price tracking based on Daltix data shows that for some common products there are very substantial price differences. Scroll through the graphs below to show the evolution of the lowest price, including promotions. Looking around some different retailers before deciding where to buy can definitely pay.

For a Lego City Train the price difference goes as high as 153%.  Another Lego product shows a 138% difference between the most and least expensive stores at the same moment in time. The same story goes for some Playmobil products where we saw differences of up to 174%. Parlor games show a similar pattern with differences of up to 200%. 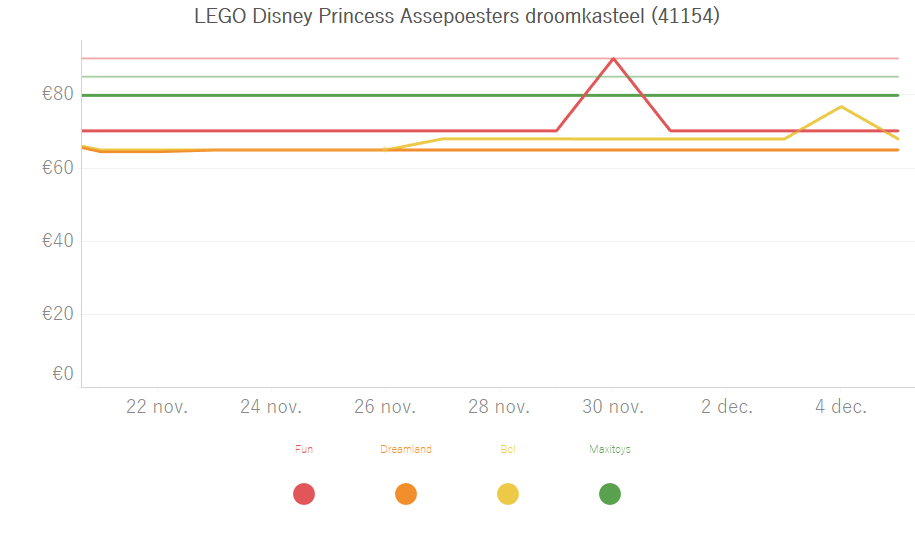 These findings show us that it’s not really worthwhile waiting until the last days to buy presents. Promotions were relatively scarce in the weeks before today and no major price changes showed up for the products above. However, it pays off to check out different retailers before buying a specific product! Some large price gaps exist and it’s definitely not always a pure player who is the best buy.

This is an analysis done by BrainTower on data provided by Daltix.